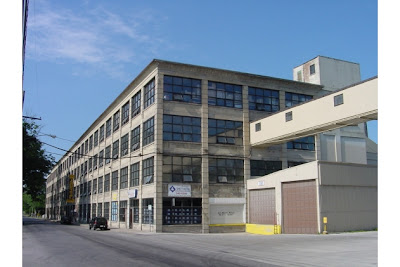 So tomorrow, Danielle W. and I are assisting in a Paranormal Investigation at the Batavia Industrial Center (BIC) in Batavia, NY. Aside from the obvious, this is a very special thing for us because we have both been involved with a theater group that works out of the space on the East Side of the complex. In preparation for our night, I was interested in finding out a little history of the building beforehand so that I'm aware of what I'm walking into, and what might be sticking around still.

Fortunately for us, all of the history I found was business and industrial related as the building hasn't had too many other uses. No murders, no suicides, just one shady break in back in 2009. In fact, I was unable to come up with a single piece of evidence or claim online that this place is actually haunted. I couldn't find any anything, other than the fact that the building is old and there are 2 very old (mid 1800s) cemeteries across the street.

Here is some of the history that I dug up. I had no idea that the building had such a longstanding community involvement. 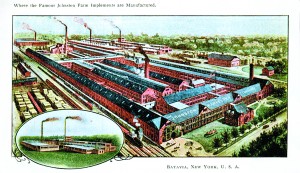 June 1882: John Harvester Works moves to Batavia after a fire destroys his factory in Brockport
1880s: After lobbying by Batavia citizens, a factory is built on Cemetery Street, which is renamed Harvester Avenue. They manufacture grain harvesters.
Early 1900s: Company expanded in the agricultural field. A steam whistle is built outside of the  factory and blows at 7:45am, 8:00am, 12:00pm, 12:30pm, and 4:30pm. If wind conditions were right it could be heard over most of the city and in outlying communities.
1910: Owner, Byron Huntley died and a Canadian company named Massey-Harris buys a controlling interest in the company.
1917: Company’s name is changed to Massey-Harris Harvester. 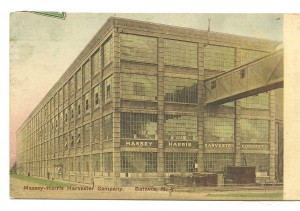 Early 1940s: Company declined during WWII because they did not take on defense work.
1945: Under the Marshall Plan, Massey-Harris farm equipment was sent to Europe to help rebuild after the war.
1949-1951: Record sales and 1,700 employed at the Batavia Factory. 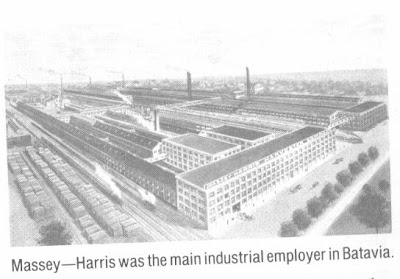 1952-1953: Strikes, combined with movement of US agricultural center into the Western US took its toll on business.
1954: Massey-Harris merged with Harvey Ferguson becoming Massey-Harris-Ferguson. Company sales and workforce continued to decline.
1955: Massey-Harris-Ferguson had shrunk to 1/5 of its 1950 size.
Sept 5, 1957: Charles A. Rose (Batavia general factory manager) announces the closing of the Batavia Factory by January 31, 1958. About 280 employees lose their jobs.
June 1958: Batavia complex officially closes. Steam whistle blows for the last time.

1960: Renamed Batavia Industrial Center (BIC) becomes the first Business Incubator model in the US.
1965: BIC is full of small-business tenants.
1965-2009: This website does a good job chronicling more recent history of the building.
2009: BIC celebrates 50th year anniversary. Thomas Mancuso is now head of operations for the building.
(Other sources)

“Joe Mancuso was ahead of his time – way ahead of his time,” says Mark Rice, Frederic C. Hamilton Professor for Free Enterprise at Babson College in Wellesley, Mass., and a former NBIA board chairman. “Seeing the decline hitting his hometown of Batavia, Joe was determined to do something about it. Instead of hunkering down in the face of adversity, he saw an opportunity to enhance his own business while also helping his community by starting an incubator to support small and growing ventures.” 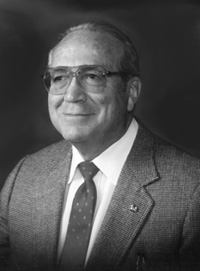 When Massey-Ferguson closed its Batavia plant in 1956, it left behind an 850,000-square-foot complex of multistory buildings and massive unemployment. The Mancuso family, which owned a number of businesses in the area, bought the campus and charged Joe with filling it. Unable to find a single tenant for the plant, Mancuso divided the building into individual spaces and provided the businesses with advice, shared office services and help in raising capital. He instead started to take in any size business and do everything possible to help them grow, hire more people, and rent more space. This was the birth of the concept of the business "incubator", describing a building where small businesses were "hatched" and nurtured until they were strong enough to become independent. These mature enterprises or "graduates" would then invest in buying or building new plants when they moved out of the "nest" into the community. Within five years, the entire complex, called the Batavia Industrial Center, was full, and the business incubation industry was born.

Making a difference in his community ranked high in Joe’s mind, says Tom Mancuso, president of Mancuso Business Development Group and Joe’s son. “He was always thinking about how to help people have jobs,” Tom says. “Since ‘you’ve gotta work with what you’ve got’ was his mantra, old buildings always made sense to him. In his eyes, almost every old building offered an opportunity to ‘let people take their chance.’ It is our job to help them make the most of that chance. When a client needs something, it was Dad’s habit to say yes, and then tell us to figure out how to do it.”

Tom also notes that Joe promoted sustainable development long before it was stylish to be green. “Dad felt we should take advantage of pedestrian-friendly locations with existing infrastructure and avoid tearing down a structure to burden another landfill or draw more resources from nature to build something new,” he says.
(Original Article & here)