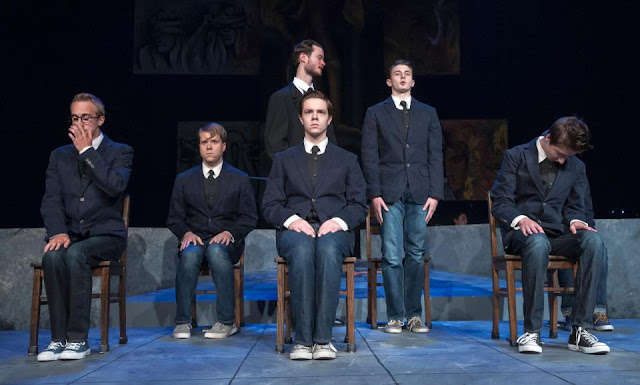 So a few weeks ago, a few friends and I went to see Spring Awakening at the JCC in Rochester. (See my post "Anticip...ation.") I was very excited to go because it had been about 5 years since I saw the show on Broadway and I'm just happy that the rites for this show finally came out. I did not realize until after the show that this was a youth production and all of the actors in it were 16-23 years old. I mean, generally, it's a younger cast because the kids are supposed to be roughly 14 or 15, but, knowing that now, the show was incredible. I thought that the leads were very capable for the most part and there wasn't too much to complain about. One thing that did irk me about this presentation was that the adults were not portrayed as a male and female "faceless" person. Instead of keeping their costumes and mannerisms similar for the two actors who played all of the male and female adults, they tried to separate them into different characters, there by making it look like they couldn't find enough people to play the parts instead of emphasizing the sentiment that all adults are this one big homogeneous group of collective thought instead of individuals, which is believe is pretty central to the story line. There was one moment when the doctor came onstage that I reacted like this because the evil intent in his characterization was so blatantly obvious that it ruined any surprise before the climax of the show if you hadn't seen it before. They also toned down a lot of the hayloft scene right before & after intermission but as there were no "warning signs" up in the theater lobby, and this was a high school and college show, I expected as much. Their "Song of Purple Summer" finale was absolutely the strongest in the entire show and it was a magnificent finale to a really good show.

It's funny because I caught myself hating some changes that were made to the staging or set, etc. and it prompted me to wonder why, as a designer, I was put off by changes to this show when I myself have been known to mess with a show or two in the past in the name of new design. I'm not sure if it's because I saw the show twice on Broadway, but I don't think so. There are other shows I've seen the Broadway versions of, like Into the Woods, that I have no problem changing at all. Maybe the difference is that this came out five years ago, not thirty, and it's still relatively fresh in the minds of a lot of people. Don't get me wrong, I'll fight anyone who says that Christine Jones' design was not the closest thing to a perfect interpretation for the show possible, but does that mean it shouldn't change? In this show, maybe. Just everything about it was a nice, tidy, lovely little package right down to the hand mics the characters whipped out of their suit coats and the audience sitting on the stage with them. The show is absolutely soaked to the bone with symbolism and that happens to be just the way that I like it. Whoever thought that some guy's play from 1890 could have turned into this?